Why I Work at the OAS

The Organization of American States is a weird place. It is the oldest existing regional organization, predating the United Nations and even the League of Nations. It has 34 member states, from small Caribbean island states to the multi-racial nation of Brazil. The United States dominates it like a 800-pound guerrilla, but even little St. Lucia has the same voting power as Washington.

It has had the same operating budget since the mid-1990s, about $75 million. In the early 1990s, it underwent big funding cuts and shed a lot of personnel, both deadwood and highly competent employees who found themselves at the wrong end of the restructuring. At times in the recent past, the OAS barely had the cash to pay the next payroll. It is currently going through another budget crisis, as well as questioning of its institutional mandate.

In its halls echo the lofty Pan-American ideas of Simon Bolivar, Victor Raul Haya de la Torre, Franklin D. Roosevelt and John F. Kennedy. The changes have run parallel with the Summit of the Americas process in which three times (Miami in 1994, Santiago, Chile in 1998 and Ottawa, Canada in 2001) all the heads of state of the Hemisphere have set the agenda for inter-American relations and asked the OAS to take a lead role in achieving goals.

It's an organization with an uncomfortable relationship to Washington, its host - despite sitting between the White House and the State Department, it does not seem to grok politics within the Beltway. It is tone deaf to the language of the U.S. Congress. Congress lumps the OAS - unjustly, according to U.S. State Department officials -- in the same budget allocation as the United Nations and other international agencies that have been the whipping boys of Jesse Helmes and the conservatives. Almost always, it's a sideshow to the most pressing world events.

At its worst, the OAS is an hothouse for diplomatic waffling. At its best, it lurches towards relevance and concrete impact. What may seem a minor achievement in Washington can change the shape of things in La Paz or Caracas. More and more, it's results-driven because it has to prove to its own members and donors that it can achieve its goals and do a job that no other institution can do. Many OAS units are increasingly entrepreneurial and get special funding for projects by demonstrating their unique capabilities.

I am not the only one who thinks that there are redeeming qualities in the OAS. the National Democratic Institute (NDI) awarded it the 2002 W. Averell Harriman Democracy Award in recognition of its expanding efforts in protecting and promoting democratic values and institutions throughout the hemisphere. The annual award is presented by to individuals and organizations dedicated to democracy and human rights.

For another opinion, look at this U.S. State Department fact sheet on Summit of the Americas accomplishments.

When I started up this website, one of my first pages explained why I had decided to spend such a long time in Peru. My extended residence was more than just short-term exposure to another culture or to add to my professional résumé to show that I had international experience. I think the time has come to explain why I work at the Organization of American States.

When I started scheming up ways to reinsert myself into the United States after living 16 years abroad, I did not put the OAS on the candidate list for applying for a job. My awareness of the institution was limited to sketchy press coverage and a few friends who had bad vibes from working there back in the 1970s. It seemed musty, looking at its past, not facing the future, and hardly a place that would welcome innovative thinking.

But in 1998, I decided to target working at bilingual (Spanish-English) or multilateral institutions, preferably in the information technology field. I wanted to work somewhere I could apply my experience in Latin America. I happened to walk into a temp agency that provided warm bodies to the OAS for short-term duty. The owner said that he had the perfect job for me and asked if I could start immediately. Well, the OAS works at its own pace and I spent the next five months doing temp work around DC. In August, I began working for the Information Technology Division. I spent two years in user support, especially with the Permanent Missions. I finally got an opportunity to become a full staff member, working with the Inter-American Telecommunications Commission as the web developer for 15 months. In July 2001, I rejoined ITD when my former boss got a staff opening and asked me to apply.

Big picture
I find working at the OAS challenging because it is changing on the march. It's being shaped by new political and economic forces in the region. It is being influenced by new actors entering the game, requiring a different mindset. The OAS is no longer just about governments and diplomats squaring off around negotiating tables. Civil society and business are playing a bigger role in inter-American affairs. It is being pushed by new technological trends. In order to apply technology effectively, you have to keep these changes in sight. The stakeholders come from a broader crosssection of the region. IT can play a key role in involving these new participants in the process. The biggest leap is that the OAS is the perfect example of a virtual organization.

Impact
The OAS is the kind of institution in which one person can have an impact. It is not the World Bank or the Inter-American Development Bank that have many times over the resources that the OAS has. Each individual contribution counts. It is really gratifying to feel that my colleagues and superiors appreciated my work. Even more stimulating is that I perceive I surpassed expectations.

Window of opportunity
Because of budget shortfalls and lack of sufficient staff, the OAS has lagged behind other international institutions in adopting new technology. In the past two years, it had begun to catch up. We have just remodeled the General Secretariat Building, including new network infrastructure and horizontal cabling. We will revamp the 100-year old Main Building and the Administration Building on the rest of our campus. I get to deal with lots of vendors and consultants in bringing together the technical support for these projects.

What fascinates me, however, is not so much the technical aspects of IT, but how it can change organizations, enhance working relationships and increase communications. While ITD has strong technical expertise, the pressing issue is how to apply it and get people to use it efficiently. The key is to enhance the exchange of information through as many formulas and packages as necessary.

Selling an idea
There's a large dosage of salesmanship that is needed to help non-IT people to understand the potential of these new directions. My writing skills and research experience help explain the advantages and issues. In a sense, I'm still applying my journalism experience. There are still OAS users and partners that are getting a handle on computing. Many people still use the computer as an expensive typewriter. Others use only certain tools, like Instant Messaging for their personal use, but have not used the same technology to their work. I work with other ITD staff who are, for the most part, my junior. It's a team that is reaching maturity and gaining confidence in its own abilities.

Technology Pathfinder
Many of my duties require me to be a kind of technology pathfinder because the OAS had never done these tricks before. I have to explore options, research approaches, contract vendors and consultants, chat them up to acquire criteria and then boil this down into a set of options that the senior management can choose from. The OAS will be introducing a new generation of technology - online collaboration, videoconferencing, IP telephony and other technologies -- over the next few years. I wouldn't call my self a strategist because I am still too junior in the organization. I have become a kind of IT shock trooper, thrown into projects that need support and extra momentum.

Applied learning
I got my Masters of Science in Information Technology from the University of Maryland University College in its Executive Program in May 2003. On the job, I have immediate opportunities to apply my learning, almost on a daily basis. At the same time, my on-the-job experience fed back into my class work. I had a great group of classmates who make our long class sessions a real joy over the 18 month program. It was really a win-win situation for me -- and hopefully the OAS. This dynamic between work and study created a kind of learning environment, and I am continuing this practice with a technological website, called Backdoor Tech. 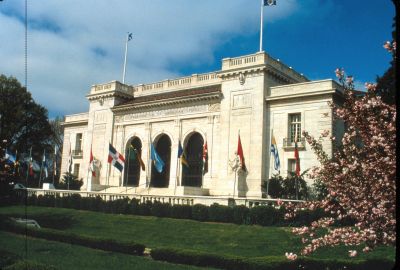 It should be clear from that any opinion expressed here about the OAS and its policies is my own and does not represent any position of the OAS or the IT management. As a new employee, I am still learning the ropes and the realities of a complex, human enterprise. As an institution that can trace its legacy back to the 19th century and brings together multiple cultural and political experiences, you need to respect those differences and see how you can work within them.