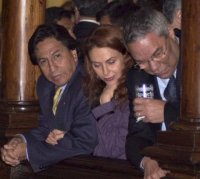 Toledo with U.S. Secretary of State Collen Powell at the celebration after the signing of the Inter-American Democratic Charter in Lima in September 2001

Alejandro Toledo of Peru Posible has managed to carve a place for himself in Peruvian politics despite not having a real political organization behind him. In the tainted 2000 campaign in which Alberto Fujimori won a third presidential term, Toledo, now 55, became the de facto leader of the opposition. Now he can lay claim to the presidency after an ugly, conflict-filled campaign. On June 8,he beat Alan Garcia in a runoff with 52% of the vote.

Despite the precedence of a Toledo presidency, the man himself has performed poorly in his first two years in power, squandering any political good will and capital he might have had. Now in his third year in power, he is just hanging on by the skin of his teeth to squeak through to the end of his term. Although the economy is coming out of a prolonged downturn and growing at the fastest pace in Latin America, Toledo's campaign promises and ham-fisted management skills have driven his government into a quagmire of unsatisfied social demands and political upheaval.

Toledo has been on the Peruvian political scene since 1981 when he returned to Peru from his studies abroad. He joined the staff of Labor Minister Alfonso Grados in the second Fernando Belúnde government. He was Grados's social policy advisor in an attempt to temper the neo-liberal line coming from Manuel Ulloa's cabinet.

At the time, I was The Andean Report's politics and labor affairs writer and Grados frequently handed me over to Toledo for background briefings. It was really tough to pin down Toledo on specifics. I thought it was because he was hesitant to get burned politically in an untested arena. Now I realize he was winging it as a policy maker.

His studied baritone voice, tailored, stylish suits and carefully coiffed black hair gave the impression of being assembled to counter his facial characteristics of an Andean Indian -- dark skin, large angular nose, short stature. At the time, I did not know that he had been a shoe-shine boy in Chimbote

or his large family of 16 brothers and sisters, of whom six had died while he was still a child.

Credentials as an economist: He has two masters degrees and a Ph.D. in human resource economics from Stanford. Toledo was frequently cited as a possible candidate for finance minister in both the Belaunde and Garcia governments, and Toledo played the media well to magnify his standing. He has worked for the World Bank, the International Labor Organization, the Inter-American Development Bank and the US International Agency for Development, among others. He was a Visiting Scholar with Harvard University's Institute of International Development from 1991 to 1994. In Peru, he has worked with ESAN (Escuela de Administración de Empresas para Graduados), the leading business school in the country. However, he has no real administrative experience.

He ran for the presidency in 1995 but barely appeared on the radar screen. Because he was not able to get the required 100,000 signatures to register his party, he had to form an alliance with another group, Coordinadora Democrática. He won 3% of the valid votes, compared to Fujimori's 64%. His coalition got 4% of the congressional vote and five seats. Shortly after the elections, he broke with CODE's José Barba Caballero. Of course, no presidential candidate was able to compete with Fujimori because he was riding high from defeating subversives, reducing inflation and rekindling the economy. See the Fujimori section.

In the 2000 campaign, Toledo surged to the front as the main opposition vote getter against Fujimori. It caught most political insiders by surprise.

What allowed Toledo to surge ahead:

Toledo was separated from his wife, Elaine Karp, a Belgian-born Jewish American anthropologist, but the relationship was revived prior to the 2000 campaign. A gringa trophy wife was expected to score points in the working class from which Toledo has emerged. But during the 2001 campaign, Karp has proven a sharp-tongued speaker who has been a liability for the candidate, but any comparisons with Hillary Clinton are off the mark. Toledo's private life has come under examination, including a 13-year-old illegitimate daughter whose cause became a major issue once Toledo took the presidency. Toledo and Karp have one daughter.

Toledo has also admitted that he tested positive for cocaine usage in 1998, saying that he had been abducted by Vladimiro Montesinos's goons and videotaped with prostitutes to blackmail him.

He was born in Cabana, Ancash in 1946. He studied at the (Jesuit) University of San Francisco on a soccer scholarship. He then went on to Stanford University for graduate degrees.