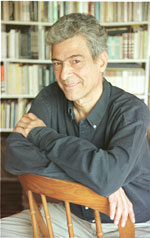 Toño is probably the best known poet of his generation. He won the OAS's Gabriela Mistral Inter-American Cultural Award in 2000. He lives his life as a poet, academic and literary critic, as well as on the fringes of journalism. I don't know how he does it. Well, I do in part: he gets invited around the world (England, France, Hungary, the United States) where he charms entire university campuses. Don't let him drag you into a tavern; you won't get out before two in the morning.